Feist on her way.

G! picked up two tickets to the Feist show in Burlington on 9/9. If her friend backs out I get to go. Maybe Jason Collett will show up and they will do Hangover Days(rightclick-save as).
There are a veritable ton of shows coming to the Burlington area in the next few months, here are the ones I'm most excited about.
Ben Harper @ The Flynn
Band of Horses @ HG
Grizzley Bear @ HG
Okkervil River @ HG
Andrew Bird @ HG
Del tha Funky Homosapien @HG
I don't know how many i'll get to, it all depends on money and timing but things are lookin good. 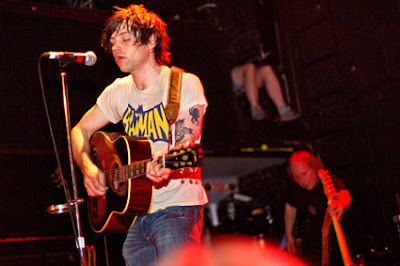 I am fuel, You are Friends has a great review of the recent Ryan Adams show at Berkley. I'm sure you picked up the excellent album Easy Tiger, but did you see the picture in the booklet of his Black Flag bars tattoo? Who knew?

If you have a strong stomach you should check out the first eye tattoos. It ain't pretty kids but if you like Dune this might be the look for you.
Posted by kingdomforavoice at 9:43 AM 4 comments: 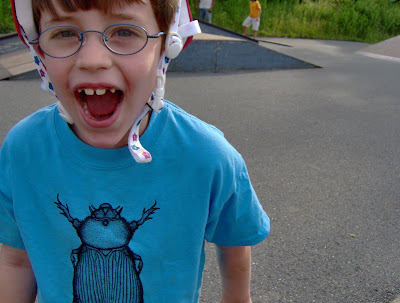 My youngest son has recently discovered the glory of youtube. He spends the entirety of his time on the site watching the videos for "forever Lost" by the Magic Numbers and "Young Folks" by Peter Bjorn and John. He can seriously sit for half an hour going from one to the other. For a little more insight into the Beez here are his top five favorite songs.
1. "Young Folks" Peter Bjorn and John. He refers to this as the Whistle song.
2. "Forever Lost" The Magic Numbers
3. "Laika" The Arcade Fire. He cals this Alex.
4. "Love My Way" The Psychedelic Furs. Referred to as Mom's song.
5."You can have it all" Yo La Tengo

Every once and awhile I have to do a major musical overhaul of the old ipod it could be for any number of reasons, things get stale, i realize something esential is missing, whatever. The last time i did an overhaul i dipped into my hip hop folder(which is admittedly full of 80s and early 90s artist) and added some old favorites. 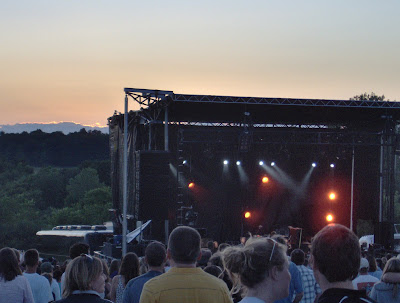 I was very tempted to just make this review of the sold out Wilco show one sentence long. If i were to do that it would read: Wilco played a rousing version of California Stars. False 45th has a well written review up right now so i'll just throw out some random observations. 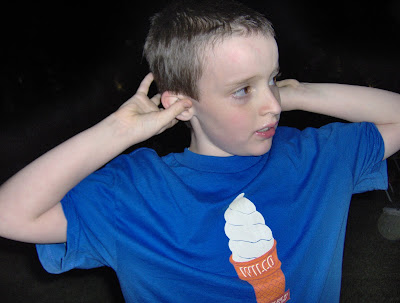 Most of the kids were in Oklahoma so G! and i took D with us for his first concert. Here he is rocking the summer tour shirt. The merch was pretty good, in addition to the tee G! picked up a bag for $5 and i grabbed a patch. The limited edition show poster was a bit lame so i passed on it. 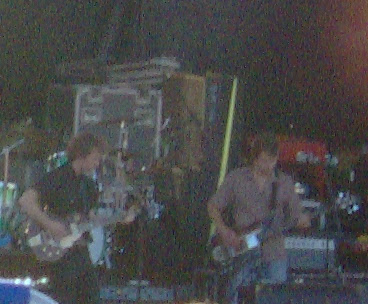 Low played a pretty good set although it seemed a bit out of place on a beautiful day at an outdoor show. We arrived early so we saw their entire set i really liked it but again the fit was off.
There were a lot of kids everywhere which ended up being pretty cool. There was a lot of dancing going on in the area we were in which was to the left of the soundboard close to the merch tent. At one point we realized that several of the families had cleared out and then we realized that a group of meatheads had a couple of joints going not far from us.
I teased G! all concert long at her weak attempts to yell out songs requests between songs but they did end up playing Claifornia Stars so way to go girl.
Posted by kingdomforavoice at 10:36 PM No comments:

Somehow i've not posted the fact that Scot and I are doing a sneaker blog together. If you want to read two guys geeking out about shoes check us out at Lace Lock Losers.

In related news i got my print in the mail and it is amazing! There are still some left but don't wait, get one now.
I've also got to mention that i got a sneak peek at the graphics for the new Igloo Tornado shirt, prepared to be blown away.
Posted by kingdomforavoice at 11:36 PM 7 comments:

If you could wear out an Mp3 it would be time for me to rebuy The Cribs new single Men's Needs. I don't know what it is about the song but i'm hooked. CSS just put out a great remix of the tune.
Download - The Cribs - Men's Needs(Css Remix)
Check out this perfect lotech video for the song.

Posted by kingdomforavoice at 8:44 AM 5 comments: