You've peobably seen these new findings concerning Guinness. That's right, it is actually good for you which is great news. I mean it basically does the same thing taking a baby aspirin does for you but then again, great excuse to have at least one Guinness a day. Of coarse you could take the aspirin and skip out on all those calories but i digress.
The greatest part of this whole story is the research itself, they gave dogs Guinness!! I mean come on, we've all wondered how hilarious a drunk dog would be. If t.v. taught us anything it's that having a drunk dog around somehow insures lots of bouncy ladies will be all over the place.
I can't wait to see what comes out of the "Lets get this Chihuahua high" line of research.
Posted by kingdomforavoice at 3:19 PM No comments: 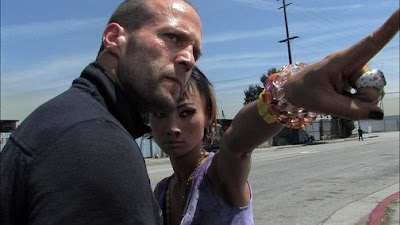 "I think someone is shooting a decent movie over there!"
I wasted one hour and thirty six minutes last night. Well maybe just one hour and thirty three minutes because there were titties and a mullet.
I waste time constantly so it isn't the time suck that irks me, it's the fact that for some reason I watched Crank 2 in its entirety. What does this say about me? Don't get me wrong, I don't demand deep meanings in my movies, I love a good one dimensional comedy or action film. I'm a fan of bad movies, not just bad movies that weren't meant to be bad but bad movies that are made with a full realizaion that they are painfully rediculous. I don't even mind suspending disbelief when I'm movie watching; Zombie, Sci Fi and horror flicks are some of my favorites. It's hard to put my finger on any one or three things that really put me off this movie but nevertheless...
I wonder how a movie like this gets made, what's the pitch to the studio like? How do you get fairly well known actors to appear in something like this? It seems like i'm always hearing about awesome sounding scripts that can't get made but something like this can and gets a big marketing push behind it? All right, I'll stop shaking my fist at those rowdy kids on my front lawn.
The above paragraphs have pretty much revealed my feelings on Crank 2 and in the interest of full disclosure I like Jason Statham and Amy Smart(notice I didn't mention Ling Bai) and feel like they did a good job acting the movie. I think the real problem is that this movie requires the viewer to be a little drunk or stoned and to have consumed at least a case of red bull to really appreciate the subtlties of the film. I'll just rundown the highlights and leave it at that.

Posted by kingdomforavoice at 3:06 AM 3 comments:

This is so metal it hurts.
Posted by kingdomforavoice at 3:51 PM No comments:

My daughter and I caught the finish of the 2009 Tour de France, it was awesome.
Posted by kingdomforavoice at 11:37 AM No comments:

Dinosaur Jr is back

Remember when Dinosaur Jr were awesome? After they started shedding members(Lou Barlow, Murph) and fighting they were still good but not quite where they had once been, but in all honesty I really liked Green Mind. Well all the boys are back and with the new album Farm they are back to form. I've been excited for this new album since seeing the video for Over It a couple of months ago but in the back of my mind I felt like the entire album couldn't be as good as this song, it is. I did like Beyond(the first new album with the original members) but this album is a tad heavier a little bit prettier and to my ear just better. I'm guessing J has loosened the reins a little and is letting everyone have a little input. The band as a whole sound good and they seem to be having fun in the music.

Dinosaur jr has stayed on my radar for the last few years with Nike putting out a great high top dunk in their honor and Alien workshop putting out a board with their graphic on it as well as including J and one of their songs in the most excellent Mind Field video released last year(which also included two Animal Collective songs, check it out if you get a chance). Hopefully I'll be able to catch them when they play Paris in a couple of months.

Yeah, I'm pretty sure that's Mike Watt sitting on the truck and at the party.
Posted by kingdomforavoice at 4:26 AM No comments: 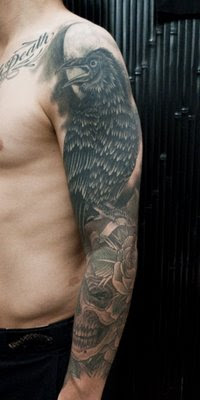 Look at this amazing work by Thomas Hooper it's rare that I see a tattoo and want to steal it as is but i'd get this done in a second, well i might change up the skull a little bit and maybe go for a more Mike Giant style rose but damn the raven and the moon are perfect. If I end up in New York i'll have to look this guy up. Go to his site and check out the close up shots of this incredible piece.
Posted by kingdomforavoice at 3:17 AM 1 comment:

Mike Giant has a new store and a blog in addition to what he posts on the Rebel 8 site. This should be pretty interesting since his partner does most of the posting on the Rebel 8 site. The new shop The Skullz Press will be open to the public and feature new are every month. It sounds like he is selling his work directly to the public, maybe as a result of his(supposed) problems in Paris a couple of months ago. It does sound like he has lots of stuff in the works, maybe having his own space has set the creative juices to boiling.
Posted by kingdomforavoice at 10:19 AM No comments: 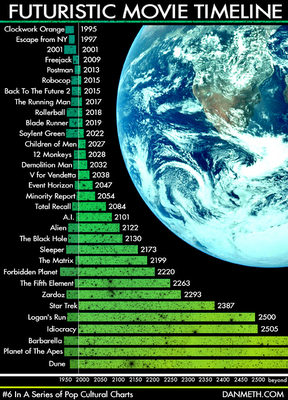 This is a great visual. I think everyone is aware of how far off the movie 2001 was but it's hilarious to see some of these other movies in the continuum. I found this chart on this site.
Posted by kingdomforavoice at 2:31 AM No comments: