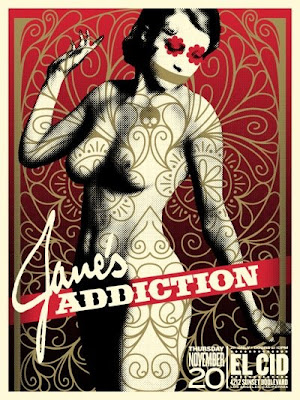 Somehow the fact that Jane's Addiction has reunited with the original lineup totally slipped past me. Jane's Addiction is one of two band's that really did the most to shape my musical tastes(R.E.M. being the other). I can't find any information on tour dates but they've been playing around L.A. a little and Shepard is doing posters for them, Dave Navarro is keeping everyone in the loop over at 6767. Phil is gonna shit a brick when I tell him.

Chuck Klosterman has a hilariously sincere review of Chinese Democracy here.
Yes, I chose that picture because of the shoes.
Posted by kingdomforavoice at 1:59 PM No comments: 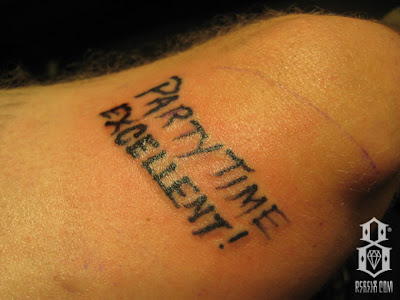 Mike Giant is back in SF(I'm not stalking him, it's on the Rebel 8 blog) and getting stuff done. The Rebel 8 blog as a nice post on drunk tattooing, this is why it's probably good that i'm not good friends with any tattoo artists or even people with tattoo equipment. 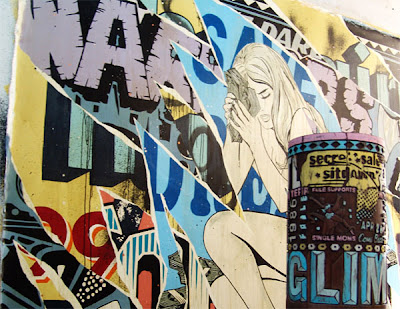 Fecal Face does a studio visit with Faile, the woodwork pieces are insane. I'd like to see how they did those columns. 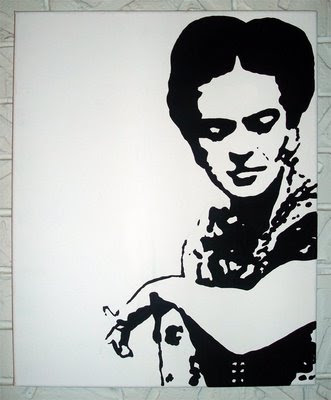 Andrea has some sweet new pieces up(The Frida obsession continues) on her site Owl My Love. Congrats on the Etsy love.

Shepard goes off on Ebay resellers on the Obey site. 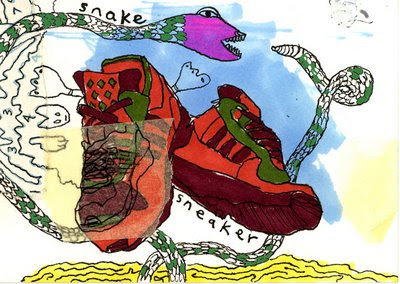 Scot has added a couple more letters to his most excellent ABC project. Obviously S is my favorite so far, check it out on the Loser Goes 1st site.
Posted by kingdomforavoice at 5:07 AM 2 comments:

One day as a Lion 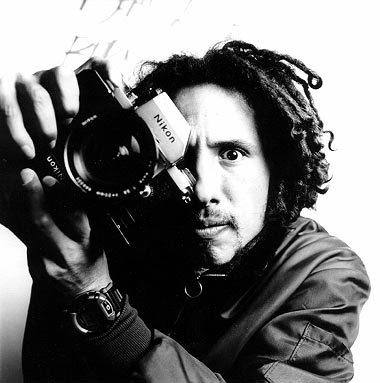 I've been listening to the Ep form One Day as a Lion which is Zack from Rage Against the Machine on vocals and keyboards and Jon Theodore formerly of The Mars Volta on drums. I really like it, the first song, Wild International, is probably my least favorite while If You Fear Dying is by far my favorite. A couple of the songs sound kinda the same which isn't a terrible thing on an ep. This has also sparked a frenzy of Rage Against the Machine listening and video watching on my part, damn those guys were amazing.

Posted by kingdomforavoice at 5:03 AM 3 comments:

Labels: EP, Mars Volta, one day as a lion, Rage 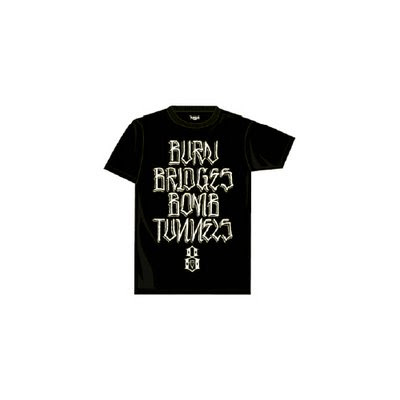 I'm not going to pretend that i don't have a slight Mike Giant/Rebel 8 obsession. With that having been said the new Rebel 8 collection is out at Giant Peach these are my favorites. 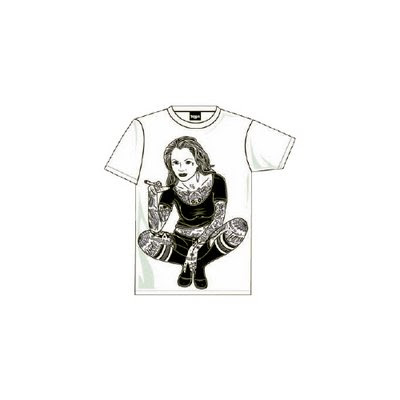 Several pieces from the last collection are on sale at Karmaloop, i've got my eye on those socks and you can't go wrong with any of those shirts. 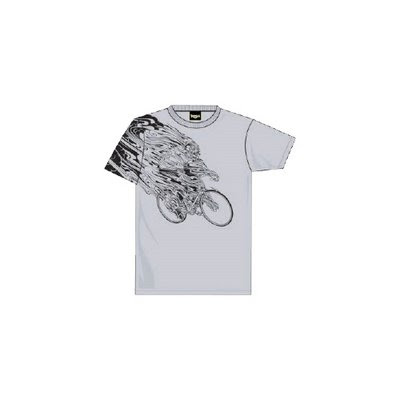 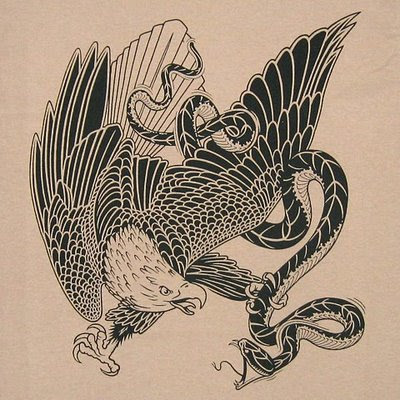 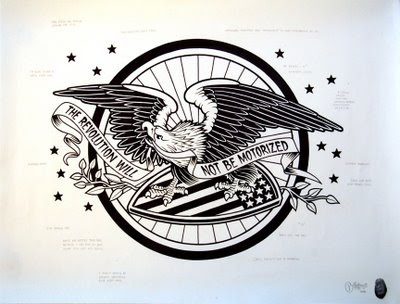 If you check in to BME on a regular basis for tattoo, piercing, scarification inspiration then you've seen this already. If not then check out this article about eagle tattoos. Obviously this guy is taking the piss out of the practice but i really like the classic eagle design. The one above is from Mike Giant's current show at White Walls in San Francisco. The picture at the top is a Mike Giant t shirt design from the rebel 8 website (if anyone needs a last minute birthday idea i wear an XL).
Posted by kingdomforavoice at 2:53 PM 5 comments:

Round One: All smiles


Warning: The majority of the French in this post is wrong.
The first trip to the prefecture was a success. A good 90% of stories involving the prefecture are laced with a healthy dose of horrors, hours wasted, documents rejected, flaming hoops jumped through, but we had a smooth first encounter. We were in and out in an hour and a half, one hour of that time was spent waiting for the one clerk who supposedly spoke decent English to return from lunch. One of my biggest concerns was the wait, it seems that most people are there for a minimum of three hours, Gretchen was there for almost five. I was mainly worried about how to keep the troops from revolting so we came laden with books, video ipods and gameboys, ready to set up camp. We weren't there long enough for me to stop sweating from the 30 degree temperature between the inside and outside before my number was called, literally five minutes.
I got through the first two or three questions; she asked for my passport, i gave it to her, she asked if the kids were there i said "oui" and pointed behind me, she asked me where i lived, "J'habite en onzeme arondissment", then she flipped to my visa and let fly with two or three paragraphs worth of unknown words while pointing to the date. I knew it had expired two days ago. I fell back on the old "Je ne parle pas francais bon". Still smiling plesently my lady went for backup and founda co worker that possesed a good knowledge of at least two dozen english words(more then the number of french words i know if you subtract the curse words). I think i managed to explain that the rest of the families visa's expired in another week and i had been perating with that date in mind(it could have been that i opened chloe's passport and pointed to the date on her visa). Somehow they, quite pleasently, tagteamed an explination that the English speaking clerk was at lunch and i would have to wait for an hour, either that or they were dumpingme(the nonfrench speaking ass hat) on the new girl. I gathered up my novels worth of documents and took a seat.
Almost exactly an hour later i was called back to the window where the very cute, miniuly english speaking clerk greeted mein French and then asked for several things all in french. After a few minutes of typing she asked for my picture, in english, and then disappeared. A few minutes later she returned with my three month visa extention(if the internet is to be believed this is the way it works, you get an extension every three months for a year and then you get a real long term visa). She then set up an appointment for me in french and explained to me what i would have to bring(everything i had with me right then). I then asked in my half English half French patois if the kids had to be there and she said NO!! This is good news, i hope she really understood my question. I then thanked her profusely and wished her a bon semane and she told me "good by, have a nice day" in perfect English!!

p.s. It took me three tries to find out how much money was in my account at the bank. The try that worked was in spanish; Combien euros(point to account number raise eyebrows questioningly).
I'm on a roll.
Posted by kingdomforavoice at 10:15 AM 3 comments:

Yesssss, i want this.
Posted by kingdomforavoice at 10:55 AM 5 comments: