Threadless is having another $10 sale. I need that shirt.
Posted by kingdomforavoice at 10:05 PM No comments: 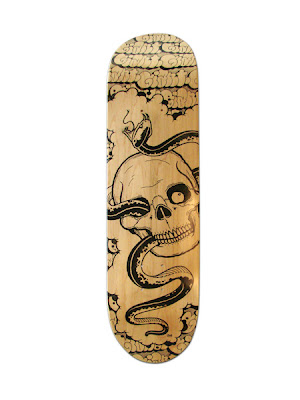 Mike Giant
Foundation one gallery has a great fund raiser going. They are auctioning off skateboards painted by lots of well known underground artists. The bidding starts at $100 and the money raised goes to a skatepark. 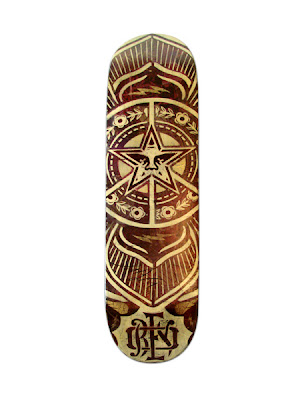 Shepard Fairey
There's something about skateboards that strikes a chord with me and i'm sure with lots of people who grew up skating, often buying boards based on the artwork alone. I've been getting after my wife for some time to let me buy and hang up a nicely done deck. Maybe while we are in Paris Colette will do another deck. Check out the art here. 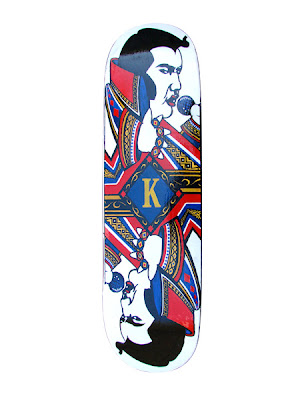 I'm a sucker for rock biographys, I've read more than my fair share of them from classics like Hammer of the Gods to my latest read Slash. My favorite of all time is probably Catch a Fire, a biography of Bob Marley, although I've read a couple of really good Elvis books and Shakey about Neil Young is another good read.
Slash doesn't pretend to be written by Slash alone, right there on the cover is the co author's name, it's nice that they didn't try to pass it off as self written. That having been said, it defiantly sounds like Slash, I'm sure it was cleaned up a bit but it still sounds like a rocker that barely made it out of high school. The content is insane, plenty of rock cliches with Axl weirdness thrown in for good effect. The first half, which basically dealt with his childhood up through the teens, had me constantly saying "Who lets their kid do shit like this?" Slash is very unrepentant about everything he's done. The weirdest thing is the fact that he has some crazy heart shocking device implanted in his chest.
Over all it was a fun read, especially for someone with a soft spot for Guns and Roses. Very little is given to the life of Velvet Revolver after the band was put together so if you're looking for VR dirt this is not the book. My main gripe is Slash constantly saying "My side of the story is", we get it slash, two sides to every story, you don't have to remind us two dozen times that Axel's take on things is a far cry from yours. If anyone out there still reads this is a pretty enjoyable read.

Posted by kingdomforavoice at 4:27 PM 2 comments:

Letter from an Occupant

My youngest is a bit obsessed with this song. Last night we watched about every video for it on youtube including the one above. He was brutal in his critique of some of the live videos. He still favors the actual video.

He listened to this at least ten times in a row today after school. It was funny to here my daughter belt out Neko's part as she did her homework.
Posted by kingdomforavoice at 5:18 PM No comments:

Winona appears nude in her new movie. The stills don't reveal much but check them out here.
Posted by kingdomforavoice at 7:51 PM No comments: