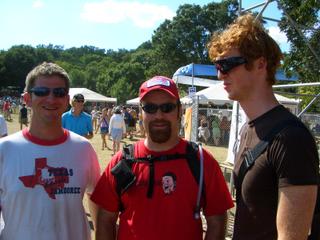 I think this picture says it all.
Posted by kingdomforavoice at 2:45 PM 3 comments: 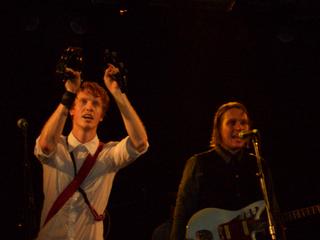 Since everyone who reads this except BJ is here with me i'll just say big ups to boo-jigga. The first day of ACL went quite well. The arcade Fire show at Stubbs was one of the top three shows i've ever seen.

Acl highlights include MOFRO whose swamp rock was awesome and he told us how to get laid. Mates of State converted everyone to fans and her boobs were a bouncin and spoon played "I turn my camera on" Now it's time for bed.

Oh, Phil managed to accidentily erase all 6900 songs off of his eyepod so we now have just a couple of cd's worth of music for the ride home.

I don't have a thing to wear.

ACL is only two days away and so is Hurricane Rita. So my question is what do you pack for Hurricane influenced weather? I guess rain is possible so an extra pair of shoes and a rain jacket. Will it be cold? I threw in a pair of jeans. Any suggestions?
My home screen printing is going very well, i was very pleased with the results.
The Wilco show tomorrow night is getting more and more complicated.

So the Hornets are relocating to OKC for the time being. Tickets start at $10, i think this might be the perfect opportunity to catch some pro ball. As soon as i find a schedule the plans will begin.

I've been thinking about which bands i'm most excited to see this weekend so here they are in no particular order.

I'm listening to the new My Morning Jacket cd. It's tasty.

Posted by kingdomforavoice at 12:41 AM 3 comments:

A day with no tickets. 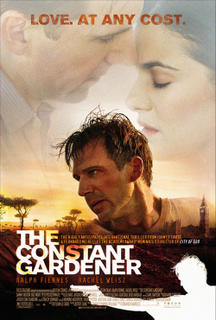 Em and I went to the movies today and saw The Constant Gardener. It was unbelievable. It was directed by the guy who did City of God and had that same kind of camera work and editing that put you right there in the film. The movie poster is a bit misleading, I don't remember him pointing a gun at anything or anyone but there was plenty of action. Em and I discussed what the best outfit would be for being on the run set on revenge and decided that a pink t-shirt and khakis was not the right look but the boots were practical enough. My one worry is that G! Will see this movie and immediately move us to the Sudan to begin saving the people there.

It was a good day overall, big thanks to Ryan for lending me his lady, she's a good date.

Listening to the new David gray CD A Life in Slow Motion. So far so good.

Let's jump on this bandwagon, Pronto!! 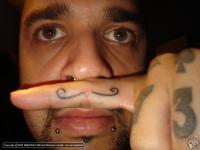 Can you believe this? It's like some sort of trend. I say we all get in now while it's still "underground" I call the foomanchu, Ryan can have the Hitler, bj you've got the Dali.
Well I got pulled over tonight and thank god for friends on the force or it could have been ugly.
Dylan's birthday was today and much fun was had at the park. The playground party quickly became a water party for D, who needs a swimsuit.
Gretchen is still a the Poverotti concert.
I am listening to the newRyan Adams album Jacksonville(thanks okryan). It is awesome. He and the cardinals are embracing his alt-countryness. A couple of these we heard at the Dallas show this summer.
I heard from Thomas, he bought Illinois and is checking into concerts. I need to get him to check into world cup tickets, just in case I'm there next summer. I mean come on, Germany is only a couple of hours away by train.
I got to hang out with Dave this evening for just a little while. He is very cool and I hope he becomes a regular(and I'm not just saying that because he might read this).
Nerdbowl starts on monday so that is one more of my evenings that is shot. Now only wednesday is still sacred and activity free.
The count down to ACL is on.
Posted by kingdomforavoice at 2:05 AM 1 comment:

I have to lie in the middle of the floor.

Why didn't i know that the Kings of Leon are going to be in OKC next month? All i can think about right now is the Wilco show on thursday and then ACL. G! is going to see pavorotti tomorrow night. That should be very cool, he's big.
Anonymous has been posting lots of comments; wanting me to buy electronics and have a bigger penis and go off to hell. I'm sorry. i think your boobs rock. It took me forever to find that comment.
Posted by kingdomforavoice at 11:30 PM 4 comments:

I never tell the truth myself 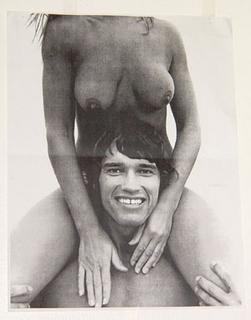 What is that Sebadoh song with the lyric "I hesitate to say that your a liar, I never tell the truth myself...Now I'm leaving you to be with someone else" And does anyone have that album.
I'm listening to Phish right now but thinking of Sufjan Stevens. I want Tomas to see him in Paris, wouldn't that be cool?
This time next week I'll be at the Wilco show and only a few short hours from driving to Austin for ACL.

I just put this picture in because its funny and "it's tits". They do look a little crazy though.

I found out last night that Chloe and Liam know most of the lyrics to "Laika" by The Arcade Fire. I had it on in the kitchen and they were shouting it at Missy. I thought it was funny, Missy did not.

Now we are on to Devendra and with that I'll go to bed. Goodnight all.

Posted by kingdomforavoice at 1:47 AM 2 comments:

This is not a blog devoted to the Kings of Leon. 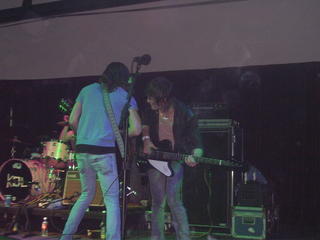 Well I got me Kings of Leon autograph today. The only drawback is that they signed the back of a ticket to the OU vs. TU game(pretty funny, right B.J.). Caleb wrote "flunk her" next to his name.
This weekend the Blue & White Tigers had their first victory. Chloe scored a beautiful shot off of a throw in!
G! has been cooking up a storm. Lasagna and apple pie last night!! I'm a lucky man.
If you get a chance ask Ryan to see the fall table, it is impressive.
Phil is now our confirmed driver for the ACL trip. Good times are about to commence.
I spent a lot of time on The dead milkmen's site last night. They have several great videos for download and the classic shirts are awesome(christmas is just around the corner).
Posted by kingdomforavoice at 11:40 PM 5 comments:

Not for the easily offended.

I just have to post this, mainly for ryan and luke. Bj hooked me up with this so we all have him to thank.
Behold, these will be on her for the rest of her life. What do you think her boyfriend/girlfriend thinks about them?
www.livejournal.com/community/bad_tattoos/19459.html
Posted by kingdomforavoice at 8:20 PM 4 comments:

Evil thy name is CAMELTOE! 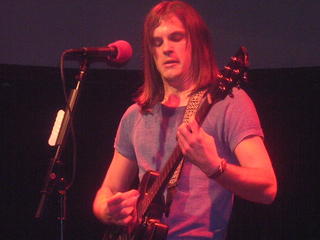 Well it's good to know that preacher Bob is still in business. A friend called from OSU and informed me that Bob is there this week and preached about the evil of the cameltoe. That was in addition to his usual act of calling every female within earshot a slut and trying to provoke frat boys to hit him... Ahh college.

The Kings of Leon website has several videos for your viewing pleasure. "Kings of the Rodeo" is awesome.

Most of the Mp3 blogs have the new TV on the Radio song "Dry, Drunk, emperor" that I'm really digging so go get it.

I managed to catch The Arcade Fire playing the Fashion awards thing... I can't wait to see them in two short weeks!! The ACL website has information on the VIP passes. The shade alone might be worth the 2500 dollar price and if that beer is all you can drink then I could probably make my money back. Maybe I'll wait on the VIP package until Ryan Adams plays again or I become very wealthy.

Well I've got to go fix the fucking rss techno plug gigachip thing. If anyone sees Bj remind him that I'm waiting for the ass tattoo.

Posted by kingdomforavoice at 12:17 AM 2 comments:

A big thank you to Ryan, I just finished watching the USA v. Mexico match and it was awesome. I'm currently streaming the Guatemala match but hey, it don't matter... We goin to Germany. Now there is like an outside chance that I will be in France at the beginning of the world cup and you know which country is right next door! I'm sure the matches will be hella expensive to get into but just imagine seeing a world cup match...
We are trying to get a team together for the spring outdoor season. They have just opened a co-ed division. We would still have to play with the young kids but that's I-yite.
I worked on "Hey Jude" for awhile this evening but the callouses have softened up on me. I guess that's ok because due to a lot of alcohol and a misunderstanding Ryan no longer has a guitar. But he does have an electric lawnmower that I need to borrow!
edit - My spellcheck wanted to replace lawnmower with Lenora? What the hey?
Posted by kingdomforavoice at 12:50 AM 3 comments:

What more could you want? 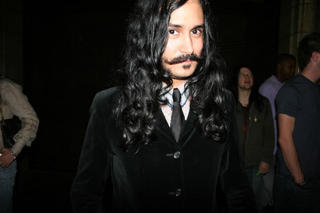 I guess no one was impressed by a tattoo mustache, so here you go, the real thing..... In all its glory. Stash be praised it is a magnificent creature. I wish I could stroke it.

Hey how bout some help on my mix tape.

A seven year old girl hit me in the nuts with a soccer ball this evening... and Ryan just laughed, bastard. 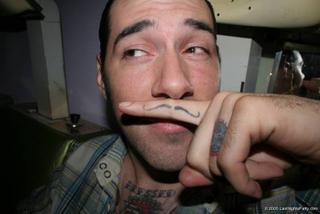 This man is obviously a genius. He will never again be without a disguise. Why didn't I think of something this obvious and brilliant? I guess I'm going to have to make my tattoos start working for me, those lazy bastards. I love this picture

In other news, the ACL problem has worked itself out in the best possible way, my boy Phil is now our touring partner. We go way back. In fact Phil was my full time concert guy until he wandered off and Ryan stepped in. This is going to be a great weekend.
I've been trying to craft the ultimate alt country mix tape, it ain't easy. I'm open to any suggestions.
Ryan now has a guitar, I expect rocking to commence soon, I need to get to workin on my chops.
Posted by kingdomforavoice at 9:30 PM 2 comments: