How awesomely beautiful is Natalie Merchant? She is way up there on the crush list. Word is that she lives in upstate New York. I do know that she was playing at the inauguration of New York's new governor in Albany on the day i picked G! and the kids up from the Albany airport. A part of me wanted them to be late so i could pop over to see Natalie while i waited. I'm hoping she has a new album in the works, it's been a long time. There are a bunch of her videos, solo and with 10,000 maniacs, on www.mtv.com.

Here is an excerpt from Spitzer's inauguration. Is that Dan Zane beside her?

Check out this vintage video for the Police song The Beds to big Without you. After Sting gets out of bed and goes to the basement check out his shirt. That's right, the classic Cain's Ballroom logo.

Posted by kingdomforavoice at 4:23 PM 2 comments:

I've been spending most of my time in these boots due to the ice and snow. Not super stylish but they are waterproof and plenty warm and being Columbia they are very comfy, Perfect for recess duty in the 12 degree weather(on warm days). My trusty old hiking boots aren't tall enough or warm enough for the Vermont winters. 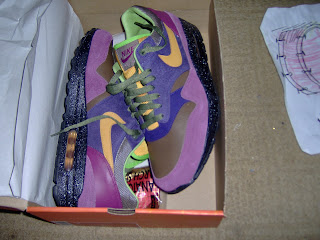 But as soon as it warms up I'm going to put some miles on these Air Max I's. That's right, three different purples. They were wicked cheap and i couldn't pass them up. I don't know what it is about running shoe silhouettes. I may be on the hunt for some Air Max 90's while in L.A., any suggestions Scot?
Posted by kingdomforavoice at 4:24 PM 5 comments: 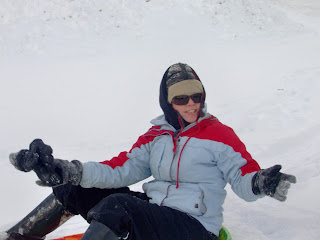 I tend to think of myself as a decent mixtape creator. I acknowledge the fact that one of my failings is that I don't always think about what the songs are actually saying. My strategy is to put a bunch of songs on that i like and i know that the person I'm making the tape for doesn't hate(except for Dashboard, i love him and i will bombard you with his music until you capitulate). It's always nice to throw on a couple of old favorites mixed with some new stuff that you know they haven't heard yet. I don't subscribe to any certain sonic mix. My wife likes to make mixes with a really soft song followed by a really loud song. Some people i know prefer the slow build, I just want it to sound like the greatest radio station ever.
A few days ago I felt like making a tape for my wife of twelve years. Now I've made tons of tapes for her over the years(even when the mixtapes were actually on tape) and I usually remember that she listens to the words. Anyway here is the track list of the mix i made for her.
1. All the Right Reasons - The Jayhawks = Our song as picked by G!, can't go wrong here.
2. My Lady's House - Iron & Wine = Title says it all.
3. Neighborhood #1(Tunnels) - The Arcade Fire = Any Arcade Fire song song will work.
4. New Slang - The Shins = Another of her favorite bands.
5. The Trapeze Swinger - Iron & Wine = One of my favorite songs. So i might have broken an unspoken rule of mixtape making "One song per band" but the whole desire to travel thing happening in the song reminds me of her so she won't mind.
6. Chinese Translation - M. Ward = She loves M. Ward but hasn't spent too much time with the new album.
7. Like Castanets - Bishop Allen = I know she likes this song because i put it on a mix for Sarah and she really dug it.
8. Did I Tell You - The Spinto Band = These kids upbeat songs are always winners.
9. Your the only girl - Mark Geary = Once again the title says it all.
10. Lua - Bright Eyes = Another of her favorites.
11. Older Chests - Damien Rice = Bringin it down a notch with a slow burner from Rice.
12. Painter in Your Pocket - Destroyer = From one of her favorite albums of the year.
13. As Lovers Go = Dashboard Confessional = I know she doesn't like Dashboard but i do. And listen to the words!
14. Tropical Ice Land - The Fiery Furnaces = Lets bring it back up with a goofy upbeat number.
15. The Bucket - Kings of Leon = Lets rock.
16. Balled of Paul and Sheila - Mason Jennings = Beautiful song about relationships that last.
17. Like U Crazy - Mates of State = I believe the title says it all once again.
18. Jen is bringin the drugs - Margot and the Nuclear so and so = A new song that i love.
19. King of Birds - R.E.M. = Her all time favorite band.
20. Better - Regina Spektor = Strong finish.

So did you spot the problem? Yea, it's the Spinto Band song. Listen carefully to Did I Tell You. I admit I just love the way it sounds. I knew the first verse pretty well but not much after that, Upon review the chorus popped out at me, whoops.
Posted by kingdomforavoice at 1:33 PM 2 comments:

Pete Maravich always makes me think of my brother. He had a borderline obsession with him back in his basketball playing years. Well this week I've been thinking about my brother a lot. A new book about Maravich came out this week, I've yet to read it but it's on my list. Get it here.

I also received the new Eastbay catalog this week and lo and behold Adidas is continuing its tribute to Pistol Pete with these great new shoes. You may remember that they came out with a Pistol Pete model last year that were pretty nice but nothing like these. I really like those hitops. Eastbay has the new shoes plus some of last years line, get them here.

Posted by kingdomforavoice at 12:42 PM 2 comments:

Son Volt is coming to the Higher Ground in South Burlington on Friday April 15th!
Posted by kingdomforavoice at 3:23 PM 1 comment:

For some reason I've been listening to Lazy Eye by the Silversun Pickups a lot lately. I'm secretly hoping they will be playing around L.A. when i visit in March. I know they're going to be in Montreal soon and am very tempted to go. I'm sure everyones tired of the Smashing Pumpkins comparison but it works dammit. Besides i would love to be in a band this good and sounding like the Pumpkins isn't a negative in my book.

Posted by kingdomforavoice at 8:08 PM 2 comments:

Shining the night away

G! and I listened to the new disc by The Shins(one of her favorites) yesterday on the way home from West Leb. Wincing the Night Away is a really good solid effort from the band that is due to drop this Tuesday. To my ear there isn't any big shift in what the band is doing on this new album. I can't imagine the pressure on the band with this release and I can see the logic in not switching up your style a great deal at this point in your career. That being said there are some really good songs on this disc.
Download - The Shins - Australia
Download - The Shins - Sea Legs
Posted by kingdomforavoice at 9:39 AM No comments:

My wife keeps telling me i should let everyone know that we are in the newest issue of Vermont Magazine(not Vermont Life), there is a piece about Chelsea and we are the "newcomers". There is a pic of us with two of our kids. 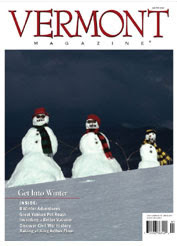 Posted by kingdomforavoice at 3:35 PM 3 comments:

Some things are just too strange for most people to truly appreciate. How about a room full of third graders singing along to the awesome 80's movie Labyrinth starring David Bowie. "Dance Magic Dance".
Posted by kingdomforavoice at 3:30 PM 1 comment: 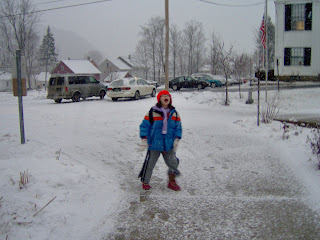 When we left school yesterday at 3:00 there was no snow on the ground. When i picked Chloe up from knitting club at 4:00 i took this picture. In the picture she is trying to catch a snow flake in her mouth or she is singing an opera aria. 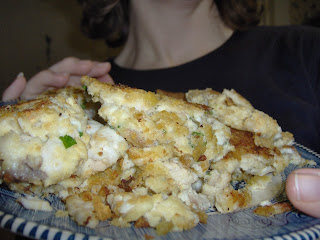 G! goes back to Law School today. Having her home was soooo nice. One night she made fish cakes. They may have been tastier then they look, respect.
In unrelated news we are going to Maine for the weekend.
Download - Ryan Adams - Cold Roses
Download - Natalie Merchant - Owensboro
Posted by kingdomforavoice at 3:57 PM 5 comments:

New news on the Arcade Fire front, but instead of writing an inferior post check out Gorilla Vs. Bear for the news and a new song. You must check out the video. 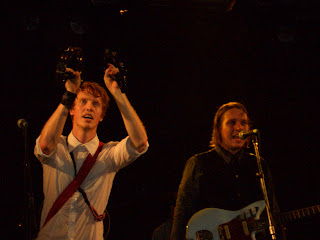 Posted by kingdomforavoice at 10:32 PM No comments:

I've been spending some time with Jason Collett's solo album Idols of Exile. Most of you probably know that Jason is the guitarist for Broken Social Scene but this album is a big departure from the BSS sound. Idols of Exile is out on the ultra hip Arts & Crafts label, home of BSS, Feist, Phoenix the Dears and plenty of others. The album as a whole is very strong he really knows his way around a catchy chorus. Most of the tracks on the disc are winners with Hangover Days and Pink Night being standouts for me. I think my favorite tune is Pink Night. It has a fantastic opening line and the line about what his girlfriend calls him always makes me think of okryan ,creator of the lamest blog ever.

Album of the year

My album of the year is far and away Destroyer's Rubies by Dan Bejar of New Pornographers fame. Like a lot of the albums i love i really didn't like this one on first listen. It's hard to believe that this guy is in the New Pornographers because this album is nothing like anything the pornographers have put out. The album is very odd and beautiful at the same time. You have to respect the fact that the first song is this long(almost 10 minute) meandering piece. My wife instantly fell in love with the album so i ended up putting a couple of songs on a mix cd for the car and eventually realized that i liked those songs. Upon revisiting the album i came to the realization that this shit is genius!
Download - Destroyer - Rubies
Download - Destroyer - Looter's Foolies

According to my ipod the song i listened to the most this year was The Monitor by Bishop Allen. Although if you add up the three versions of The Trapeze Swinger by Iron and Wine it wins by a huge margin.

Instead of a top 10 list here are the albums that i liked the most from 2006 i'm sure i've left several things out.
The Decemberists - Crane Wife
The Raconteurs - Broken Boy Soldiers
Download - Level
Margot and the Nuclear So and So - The dust of retreat
Download - Skeleton Key
Alejandro Escovedo - The Boxing Mirror
Download - Dear Head on the Wall
Bonnie Prince Billie - The Letting Go
Download - Cursed Sleep
Belle and Sebastian - The Life Pursuit
Download - Another Sunny Day
Band of Horses - Everything all of the time
Download - Funeral
Silversun Pickups - Carnavas
Download - Lazy Eye
M. Ward - Post War
Download - Chinese Translation
Morrissey - Ringleader of the tormentors
Jose Gonzales - Veneer
Built to Spill - You in Reverse
Download - Liar
Black Keys - Chulahoma, Magic Potion
Mason Jennings - Boneclouds
Download - Be Here Now
Mates of State - Bring it Back
Download - For the Actor
The Flaming Lips - At War with the Mystics
Regina Spektor - Begin to Hope
Download - Better
Posted by kingdomforavoice at 9:21 AM 2 comments: