Ripper Street and other cool stuff 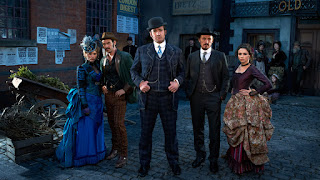 Is anyone out there watching Ripper Street? It's a great BBC series that must be playing in the U.S. sometime soon. It's set not long after the Jack the Ripper murders and the main inspector had a hand in working on that case although he is doubtful that they actually caught him. Now he and his right hand man Drake(who was in Game of Thrones) are solving crimes with the help of a Yankee. The three main characters are awesome, I can't put my finger on who I like the most. The Inspector recently lost a child(maybe) and is having trouble with his wife but always looks good, dressed in suits that make Sinatra look like a hobo. Drake is The Inspectors right hand man and a war veteran and functions basically as the muscle. He gets to beat the crap out of prisoners during "interrogations" and strong arm anyone they come across. The Yankee is also very compelling. He is an ex pinkerton(probably) and a doctor but is hiding a serious secret. He is also a drunk and living in a brothel while maintaining an magnificent mustache. There are also three female characters who's roles are slowly being fleshed out and will probably be playing larger roles as the series continues. This is a BBC series which means we only get 8 episodes(5 aired last night) but they are well worth getting into. It's fascinating to see how police work was handled back then. They are far removed from CSI and sometimes it drives me a little crazy to see them stomping through a crime scene. This is also well before prisoners had many rights and it's fascinating to see what they can do to get information from someone(I do realize it is probably half fake but I love it nonetheless). Get into it if you can.
While I'm going on about awesome things who's been listening to the new Mountain Goats or Tegan & Sara records? Both are pretty brilliant. The T&S album is surprisingly pop sounding but that's not a complaint, I love singing along to closer.

The Mountain Goats album is amazing as always.


Posted by kingdomforavoice at 3:14 AM